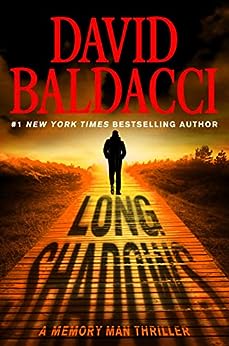 From the author of The 6:20 Man, “Memory Man” Amos Decker—an FBI consultant with perfect recall—delves into a bewildering double homicide in this new thriller in David Baldacci’s #1 New York Times bestselling series.

When Amos Decker is called to South Florida to investigate a double homicide, the case appears straightforward: A federal judge and her bodyguard have been found dead, the judge’s face sporting a blindfold with two eye holes crudely cut out, a clear sign that she’d made one too many enemies over her years on the bench.

What at first seems cut and dry is anything but: Not only did the judge have more enemies than Decker can count—from violent gang members, drug dealers, and smugglers to a resentful ex-husband—but the bodyguard presents additional conundrums that muddy the waters even further. Who was the real target in this vicious attack?

Meanwhile, Decker must contend with a series of unsettling changes, including a new partner—Special Agent Frederica “Freddie” White—and a devastating event that brings Decker’s own tragic past back to the present . . . and forces him to reckon with his future. As potential witnesses start disappearing, Decker and White are inexorably pulled down a twisted tunnel of secrets, crimes, and scandal—at the end of which lies Decker’s deadliest threat yet.

Don’t miss Amos Decker in these other bestselling series from David Baldacci!
Introducing Amos Decker, a gifted police detective with a perfect memory who must solve a mystery he wishes he could forget: his family’s murder. When a convicted killer is saved by another man’s confession, Amos Decker, now an FBI special task force detective, must find the truth. Maverick FBI detective Amos Decker must forge an uneasy alliance with the Defense Intelligence Agency to prevent an international incident that could spell the end of the United States as we know it. Star FBI detective Amos Decker and his colleague Alex Jamison must solve four increasingly bizarre murders in a dying rust belt town—and the closer they come to the truth, the deadlier it gets. Detective Amos Decker discovers that a mistake he made as a rookie detective may have led to deadly consequences in this compelling Memory Man thriller. Amos Decker—​the FBI consultant with a perfect memory—returns to solve a gruesome murder in a booming North Dakota oil town. She is the Principle: A Kurtherian Gambit Series (The