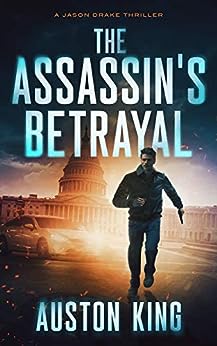 He was a hunter, a spy, and an assassin.
But then they killed the woman he loved.
So he disappeared.

Only there’s one problem, you can never hide from the CIA.

A weapon equivalent to a small nuclear bomb is missing.
Not one intelligence agency in the world has a lead.
Everyone that gets close to the truth ends up dead.

His country needs him.

Jason Drake has to come to terms with who he is.

The only way out is to go through hell.

If he doesn’t, Washington, DC will go up in flames, and the world will be at war.

The Assassin’s Betrayal kicks off one of the most full-throttle CIA assassin series to hit bookstores in decades. It has been created from the ground up to fill the space between Jason Bourne and Mitch Rapp. The extensive series will see one new novel every four months.

Auston King’s shocking debut thriller has so many twists and turns you will be left shocked. He’s an avid reader who has consumed every Tom Clancy, Brad Thor, Lee Child, Vince Flynn and Robert Ludlum book he could get his hands on and he wants to share stories that entertain, provoke, and leave you wanting more.